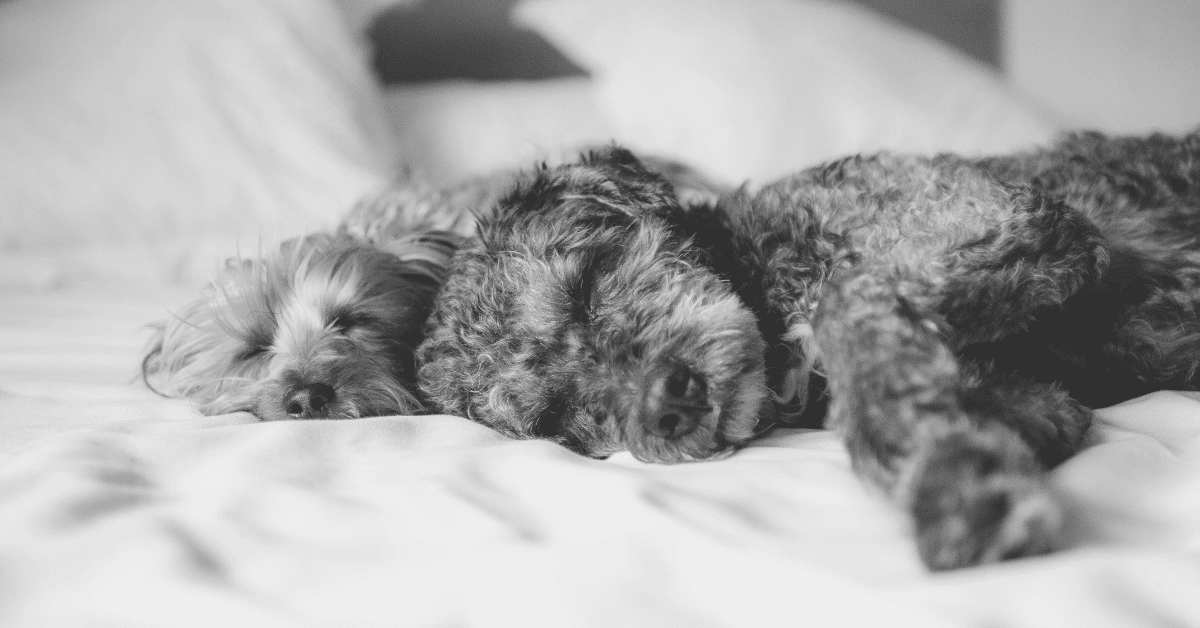 Deciding to bring a new furry family member home is a big decision.

Learning to care for your new pup requires patience and information from a trusted vet. But there are certain habits that don’t really have specific guidelines regardless of the breed or age of the dog. One of those habits is sleeping.

How do you know when your dog is sleeping too much? When is the amount of sleep normal, just a sign of a lazy dog or an actual warning sign that something is wrong with your dog’s health?

There are many factors to consider when assessing the sleeping patterns of your fur-baby, let’s take a look at a few of them.

The Breed of Your Dog

In general, dogs require a lot more sleep than humans do. The average amount of sleep for an adult dog is 12 to 14 hours per day. Larger dogs tend to take longer naps than smaller dogs. However, dogs that are more active such as hunting dogs and police dogs will sleep less because they are more regularly stimulated. On the contrary, dogs that live a sedentary life will sleep much more.

Basically, both nature and nurture contribute to the number of hours a dog sleeps during a day.

The Age of Your Dog

Like baby humans, baby dogs – puppies – also require more sleep than their adult counterparts. Puppies will usually sleep for a few hours, wake for an hour or so and then retreat back to their nap time. It is common for puppies to sleep as much as 20 hours per day.

The Way Your Dog Sleeps

Apart from just the length of time your dog sleeps for, there are some other health considerations to take into account.

For example, the position in which your dog sleeps and their behaviour before, during, and after a nap can signal concerns.

Behaviours such as pawing or circling before they lie down are actually evolutionary from their ancestors, who had to soften their own spot to lay down while they were out in the wild. These behaviours are not generally of concern unless they go on for extended periods of time before your dog sleeps or if they are a new behaviour.

Hesitation to lie down could be a sign that your dog is in some kind of pain, such as an injured limb or a degenerating disease such as arthritis. So, keep an eye out for this kind of behaviour.

Other behaviours during sleep can tell you a lot about how well your dog is resting. Sometimes dogs will lay down to rest but are actually wide awake and alert. If your dog’s ears perk when they’re resting, they are totally in tune with their surroundings and not actually sleeping.

Behaviours such as twitching, whining, even barking lightly, are signs that your dog is in a deep, restful, REM sleep and reliving their busy day! However, if the twitching appears to be violent, try to wake them up. If they don’t wake with normal prompting, check with your vet to make sure the twitching wasn’t something more sinister, like a seizure.

All in all, don’t freak out if your dog does something that appears strange when they sleep, but watch out for changes in bahaviour.

The Overall Health of Your Dog

Pay attention to your dog’s sleeping habits as they grow older. The amount of sleep shouldn’t generally be of concern unless your dog awakens lethargic or if you notice a change in the amount of sleep they are getting.

Any change in the amount of sleep that your dog is getting could be the result of anything from anxiety (yes, dogs have anxiety!), a change in diet, to changes in metabolic systems such as the thyroid. If you notice a specific change, it’s a good idea to have your furry friend examined by the vet.

Just like humans, dogs need sleep to reset their brains and rest their bodies. For the most part, each dog is different. The habits your dog exhibits while sleeping may simply be a part of their personality, regardless of how crazy they seem!

In saying that, monitoring your dog’s behaviour whether they’re sleeping or wide awake, is a good way to spot any inconsistencies and identify a health issue as early as possible. So don’t freak out if your dog sleeps all day, but be aware of your pup’s unique habits and watch out for changes.